We think extroverts have it easy when it comes to networking at business events, but the truth is networking isn’t that hard if you follow these simple networking tips for introverts.

Networking Is A Conversation Not A Sales Pitch

If you are a friendly person, even if you are an introvert, it’s not hard to find opening phrases to start a conversation such as:

If You Walk Into A Room And You Don’t Know Anyone!

Yikes, this one is the scariest for most people.   If there is a bar, it is a good idea to head that way, even if you don’t drink, because a lot of people congregate around the watering hole.

Next, look for groups of more than 2 but no more than 4.  Why?  If you see two people talking together, they might be having a private conversation and you don’t want to interrupt.  In a group of 3 or more, they are more likely to be having a general conversation.  People usually make room when you want to approach a group and include you in the conversation.

When approaching a group already in a conversation, wait until there is a natural break in the conversation before you introduce yourself.  It also gives you an opportunity to listen to the conversation ahead of time so you can add something intelligent. 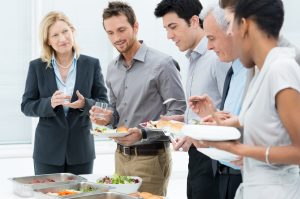 Have A Purpose To Your Networking

This could be approaching someone you would like to invite as a speaker to your own event.  It might be making a connection with a person from a particular company.  Possibly people to interview on a podcast etc.  If you find consistently that you are not meeting the kinds of people you want to connect with, you are in the wrong networking group!

Quality Not Volume is The Key

Networking for introverts isn’t that hard when you think that at an event four great connections is fantastic and 20+ is usually spammy (business card drops).  Once you’ve started a conversation, it isn’t that difficult to keep it going. As an introvert, you are naturally a good listener but you will find yourself plenty of opportunities to add your comments.  Make sure you jump on those opportunities to add to the dialogue.

Now an introvert isn’t likely to tell the world about their 5 job losses, 6 failed relationships, their domineering MIL etc. but just in case, keep that stuff under wraps because it simply doesn’t make a good impression.

Good News About Networking For Introverts?

One of the top skills for being a great networker is to LISTEN.  Yup, introverts have that in spades because they would rather listen than speak, putting the focus on other people rather than themselves.

Wear Appropriate Clothes For The Event

Business casual is the norm for most events, but since that covers a lot of ground, it’s sometimes hard to figure out what is appropriate.  Now introverts, don’t go out to every event dressed head to toe in black so you shrink into the background!  Ladies, you can make a statement, wear interesting and colorful jewelry, a bright purse or shoes and maybe a sharp color spray in your hair.   Why?  It makes it easy for people to comment on your appearance and start the conversation with YOU.

Use Networking Events To Develop Relationships

Business is a transaction between people.  We buy from people we know, like and trust and we recommend people the same way. Meeting people is therefore at the top of your ‘to do’ list.  If you do it right, it will be the beginning of a great network of people who will become your tribe.

Following Up After A Networking Event

You are in luck here because by far the best follow up tool is LinkedIn.  So this makes networking for introverts even easier because it means linking with people through LinkedIn via email and connecting later with them one on one for a coffee, later.  Isn’t that great?  Remember to ask the person if they are on LinkedIn and if you can connect with them through that platform. When introducing yourself on LinkedIn, make sure to use the section to write a personal note in the invite.  This is easy if you have just met them at a networking event and you have already had a conversation.  Do the followup soon after the event, not weeks later.

The Difference Between An Introvert And An Extrovert

It’s maybe not what you think! ! An extrovert gets their power from the energy of everyone around them.  After a networking event, they are the ones that want to carry on, go for a coffee, out for drinks etc. they don’t want to leave the party.  On the other hand, the introvert gets their power from within themselves.  They like to go out, but afterward, they would just as soon go home, put on their jammies and chill with a book.  So who are you?  An introvert or an extrovert?

When you are networking, it doesn’t matter what kind of personality you have, as long as you take care to network well.  For more tips on networking check out the chapter on networking in the business startup guide for women, Fabulous Fempreneurship.

If you are an introvert and would like to be introduced to people in Independent Women In Leadership, connect with us here and we will make introductions for you.